Here are some newspaper clippings about my artistic trajectory. Click to enlarge. 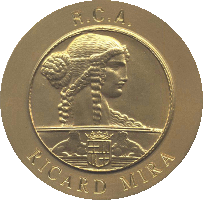 Ricard Mira was born in Valencia de Alcántara, Cáceres, Spain, on November 6, 1952. He was the third of four children. At the age of eleven months, his Valencian parents moved to Catalonia. First they established themselves in Mollet del Vallès and later in Sant Fost de Campsentelles. As a child he attended the school at can Mas Bagà, at the lower area of the village. Through his childhood he enjoyed (and stood out because of that) making his own toys, which he built from wood scraps and pieces of iron he used to find in a foundry near his home.

At fourteen he began his working life as a diemaker apprentice at the Nacional Motor SA motorcycle company, and soon stood out for his manual skills, which led him to join Derbi’s racing team, which at that time won the World Championship five times. His desire for learning caused him to take industrial studies and at sixteen he earned the Industrial Draftsman’s title at the Escola Industrial de Terrassa. The leaders of the two-wheel factory had him split his working time between the Diemaking and Racing Departments, where he was a key component as he did the most delicate pieces for Derbi motorcycles, the popular Red Bullets that competed in the World Championship.

When he was seventeen, he suffered his first break of schizophrenia and received a treatment with electroshock and drugs until age 21. In 1975 he married Pepi, and later they had a son, Ricard. When his job outlook was promising, being recognized both as a first officer diemaker and as an extraordinary expert in building parts for world-class motorcycles, his schizophrenia worsened and became chronic, which rooted out his excellent career prospects and forced him to leave the job market at the precarious age of 29.

His illness made him have too much time for thinking. The situation became distressing to him and he decided that he had to do something to release the stress caused by the disease. He determined to start working on iron sculpture, clay-modeling and wood-carving, building on his education as a drafstman and his experience as a diemaker. The good results obtained in the initial period and the acceptance of his work made him decide establishing a studio-workshop at his home’s ground floor in the village of Martorelles for creating his increasingly complex works.

Ricard Mira has gone through two very different artistic periods. In the first one he does especially metal-working and wood-carving, and even mixes both techniques in some works. He also makes some works from clay. In the second period he specializes in ironwork, and takes Pablo Gargallo’s metal sculptures as a source of inspiration.

Devoted to sculpture for almost thirty years, he has become a reference sculptor, has achieved renown and has earned admiration and respect within the art world.

Ricard Mira is a member of Reial Cercle Artístic de Barcelona ​​and of Club Social La Llum, an organization at Mollet del Vallès dedicated to the mentally ill. He often collaborates with Federació Salut Mental Catalunya, the Catalan federation of the associations formed by relatives of the mentally ill.

Throughout his artistic career, Ricard Mira has displayed his work in over one hundred exhibitions in Catalonia, Valencia, Andalusia, Germany, France and the United States. It is praiseworthy the group exhibition he made with the Reial Cercle Artístic de Barcelona, of which he is a member, at the old city hall of León, Spain.

In his professional trajectory, one must single out his participation at the 56th Frankfurt Book Fair’s Art Hall, Germany. Also, in 2007 and 2009 he participated at the 13th and 15th Fira de Forjadors i Artistes del Ferro at Besalú, Girona. In 2009 and 2010 he took part in the Trobada de Forjadors i Artistes del Ferro, Alpens. He participated at the event Forja Viva in 2010 and 2012, held in Barcelona.

He has collaborated on events in the city of Mollet del Vallès (Barcelona) such as Mollet Art 95, and it should be especially noted his delivery of a copper relief to HM Juan Carlos I, King of Spain, during the inaugural ceremony for the 47th World Shooting Championship, held in Mollet del Vallès in 1998.

His work in the first period is rough, of simple yet elegant construction. Often the materials used are small, fitted or welded pieces that are but recycled remains of several materials which, having curious forms, are used by him joining them in a colorful potpourri whose outcome sometimes may not be the one aimed for.

In his second and last period he is very prolific, deploying an intense activity and improving his technique. His pieces are increasingly complex and elaborate, acquiring depth and dimension. The metal becomes soft tree leaves which, bound together, shape the most diverse objects.

Faces, busts of women and men, weathervanes with all kinds of animals, torsos, people doing things, musicians with their instruments… and everything wonderfully bound together to form this unique and original piece which is for a collector a work by Ricard. A work splashing the sky but not completely filling it, as he leaves the remaining holes for us, for our imagination. Let’s fly, then, watching his work!